“If I were trapped in one city and had to eat one nation’s cuisine for the rest of my life, I would not mind eating Japanese. I adore Japanese food. I love it.” – Anthony Bourdain.

Japanese cuisine is a heartwarming blend of intriguing ingredients that will awaken the senses with every spoonful. Prepare to experience a host of ambrosial meals that will have family and guests saying oishii (delicious) after every mouthful.

Japanese food includes a unique potpourri of natural, lesser-known ingredients that elevate every meal. While most home cooks may find it daunting to take up Japanese cooking, there are ways to simplify dishes and still get bang-on flavor and depth.

Let’s dive into the most popular, essential, and healthy Japanese vegetables that are often the heroes of most meals.

What is the most consumed vegetable in Japan? You guessed right. It’s a daikon! It is often used in stews, soups, or simmered with seafood. Oden (one-pot dish) hot pots are a popular dish that daikon is added to for its mild yet toothsome flavor. It is also cooked with or grated over oily seafood and tempura (deep-fried meat or veggies) to balance the oiliness.

This herb is available in two varieties—the green leaves of a perilla leaf are referred to as aojiso, while the red leaves are called akajiso. Aojiso offers a distinct, sharp flavor that many describe as minty with a touch of cinnamon and cloves. Although slightly astringent in taste, the red leaves are aromatic. 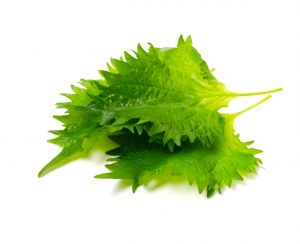 You’ll often find the green leaves in salads, stews, and soups, while the red leaves are used to make umeboshi (pickled plums).

The flower buds and shoots are the edible parts of this perennial. Japanese ginger has a slightly bitter yet invigorating flavor and softens when cooked. 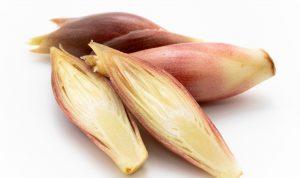 Myoga is often used as a shredded garnish in miso soup and roasted eggplant dishes for its mild pungency.

Sticky and paste-like, yamaimo is enjoyed for its slippery texture. It complements a dish with a slightly sweet flavor and carries versatile binding properties. For airy cakes and savory pancakes, yamaimo serves as a common ingredient. 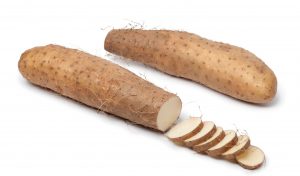 This yam is often served hot or chilled with miso soup, soba noodles, rice, or cubed tuna. It can also be julienned and consumed raw.

The bulbous bottom and leaves of the Japanese turnip are edible and can be eaten raw or cooked. Kabu carries an earthy flavor with a rich nutty, sweet aftertaste. It has fibrous skin that is soft compared to Western turnips. 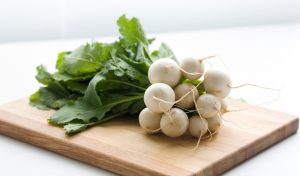 Buttery and tender, Japanese turnips are often added while roasting or steaming meats or veggies. You can also pickle and used them as a condiment.

Shungiku is a delicacy that is available throughout the year as one of the most enjoyed Japanese winter vegetables. It carries a fresh, astringent taste and is often used to replace spinach. Shungiku is added last while cooking to retain its crunchiness and texture. This leafy vegetable can be eaten raw or slowly steeped in soups or added to stir-fry meals. Hot pot dishes such as nabemono and sukiyaki are incomplete without this flavorful vegetable.

Konnyaku is the tuber of the konjac plant and is highly starchy. Its matured pulp is dried and processed with calcium hydroxide to give it a chewy viscosity. Sometimes hijiki seaweed is added for color and taste. 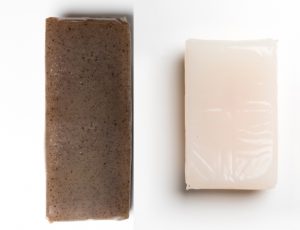 Konnayku can be shredded or sliced before it is simmered in a flavorful broth or stew. However, the Japanese often eat it plain for its intestine-cleansing properties.

Edamame is the same ingredient used to make tofu after the soybeans mature. The beans can be consumed raw or cooked. Whether steamed, microwaved, boiled, pan-fried, or charred, these versatile beans add a slightly nutty sweetness to a dish. 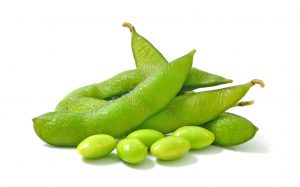 Edamame is one of several Japanese summer vegetables that are enjoyed as a snack. While the pods aren’t directly edible, they are often used in rice dishes and salads for a flavorful kick.

A kyuri has tender, bumpy green skin with few seeds and carries succulent flesh and a crisp texture. Sesame oil, soy sauce, vinegar, and ginger are commonly used ingredients that underscore the freshness and crunchiness of this vegetable. 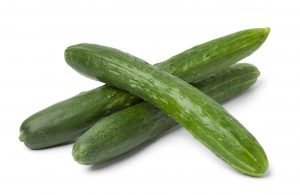 Japanese cucumbers are often pickled or used as a garnish for salads. You can enjoy them as a light midday snack.

During spring and early summer, garlic chives are usually at their softest. Nira carries a similar pungency to garlic as both contain the compound allicin, which gives it that distinct flavor. As a result, Nira adds a robust flavor to a dish and pairs well with cold tofu, soups, and eggs. 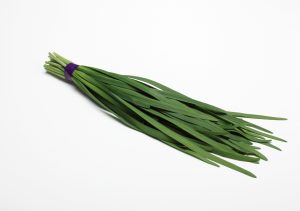 This cooling vegetable is less bitter than North American and European eggplants and makes a flavorful addition to meals. It is often broiled, grilled, or baked to absorb complementary, rich ingredients with an umami twist. Many first-time eaters of Nasu will find that a semi-sweet miso glaze brings out the eggplant’s subtle flavor. 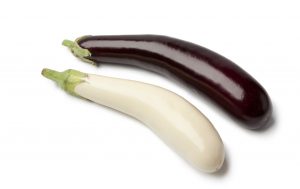 Hakusai is a hardy vegetable known to thrive in the winter season. It is enjoyed for its hearty, mildly sweet flavor. Not only is it easy to cook, but its versatility makes it a Japanese kitchen staple. 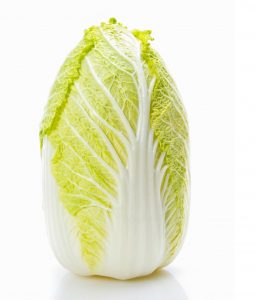 The leaves shred easily and soften to an almost buttery consistency when simmered in hot pots and soups. Cooked meat such as pork, chicken, and shrimp are often stuffed into cabbage rolls for a delightfully crunchy yet juicy mouthful.

Takenoko are edible bamboo shoots that you can eat fresh or dried. Tender and slightly nutty, this flavorful vegetable is a popular side dish often simmered in a rich broth with everyday Japanese spices. 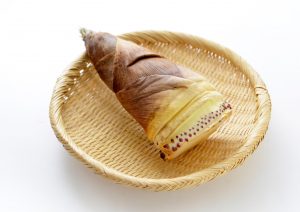 Bamboo shoots carry a subtle, savory flavor, making them the perfect accompaniment for a glass of sake (a famous Japanese alcoholic beverage made from fermented rice).

This traditional and popular vegetable carries reddish-yellow, soft flesh on the inside. It is best enjoyed when simmered in hot pots, soups, or when coated with tempura and deep-fried. Kabocha can be roasted, pureed, grated, or baked to use its versatility in Japanese cuisine. 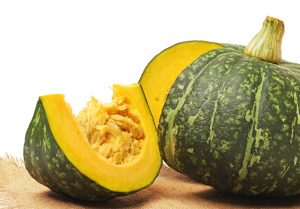 For those who enjoy squash or pumpkin, kabocha will elevate your taste buds with a sweeter, velveteen finish.

This edible mushroom grows on elder trees and has a unique brown color and ear-like shape. Kikurage has a smooth texture and gelatinous consistency that makes it absorb flavors well. It doesn’t have a distinct flavor and is often enjoyed for its nutritional, jelly-like qualities.

Dried Kikurage expands when soaked in water and needs to be hydrated before it is cooked. It is often sliced and added to salads or ramen to introduce an interesting texture.

This mushroom usually grows on the trunks of fallen hardwood trees and has an umbrella-shaped head and earthy fragrance. When added to savory dishes, the mushroom imparts an exquisite umami flavor. 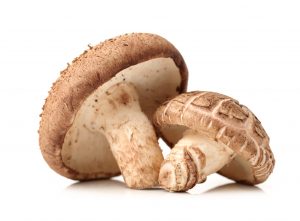 After the shiitake is cooked, it takes on a meaty texture and velvety consistency. It adds a lovely buttery finish when simmered in broths, soups, or stir-fried with meat or veggies.

Nattō is what you’re left with after fermenting the soybeans with Bacillus subtilis. The soybeans take on a slimy, sticky texture and taste a little like cottage cheese or aged Brie. 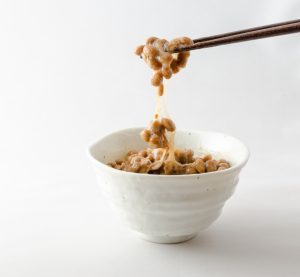 Thin strips of young Japanese ginger are pickled in plum vinegar to give them a tarty, sharp flavor. Red shiso leaves give the pickled ginger its rich red color. Beni shōga pairs well with savory dishes that include beef or pork. 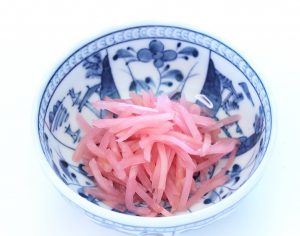 This root vegetable has a deep purple-red skin with white flesh that yellows when cooked. When roasted at high heat, the edges of the satsumaimo turn crisp, and the middle remains soft and pudding-like. It is enjoyed as a side dish or snack that is filling, nutrient-dense, and incredibly rich. 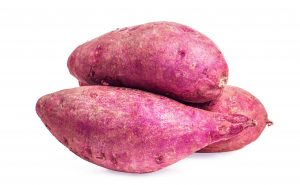 Satsumaimo is similar to regular sweet potatoes but drier and creamier.

Konbu is edible kelp that can be purchased fresh or dehydrated.  The most basic form of Japanese Soup Stock (dashi) is made from konbu and katsuobushi (bonito flakes) steeped in water to release their deep umami flavors. A richer version of dashi is made by steeping dried seafood like scallops and sardines with similar flavorful ingredients like dried soybeans and shiitake mushrooms. 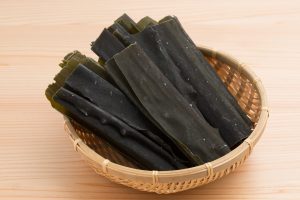 Konbu can be used for tea – that is known as “kombucha”.

There you have it—the most commonly used Japanese vegetables that will help you create a well-rounded, satiating assortment of dishes. Japanese Snacks 101 — The Salty and Savory Snacks of Japan

July 22, 2022
0
Do you love the crispiness, the loud crunch, the sharp texture, or the savory aftertaste? Whatever it is that makes you reach for your daily…