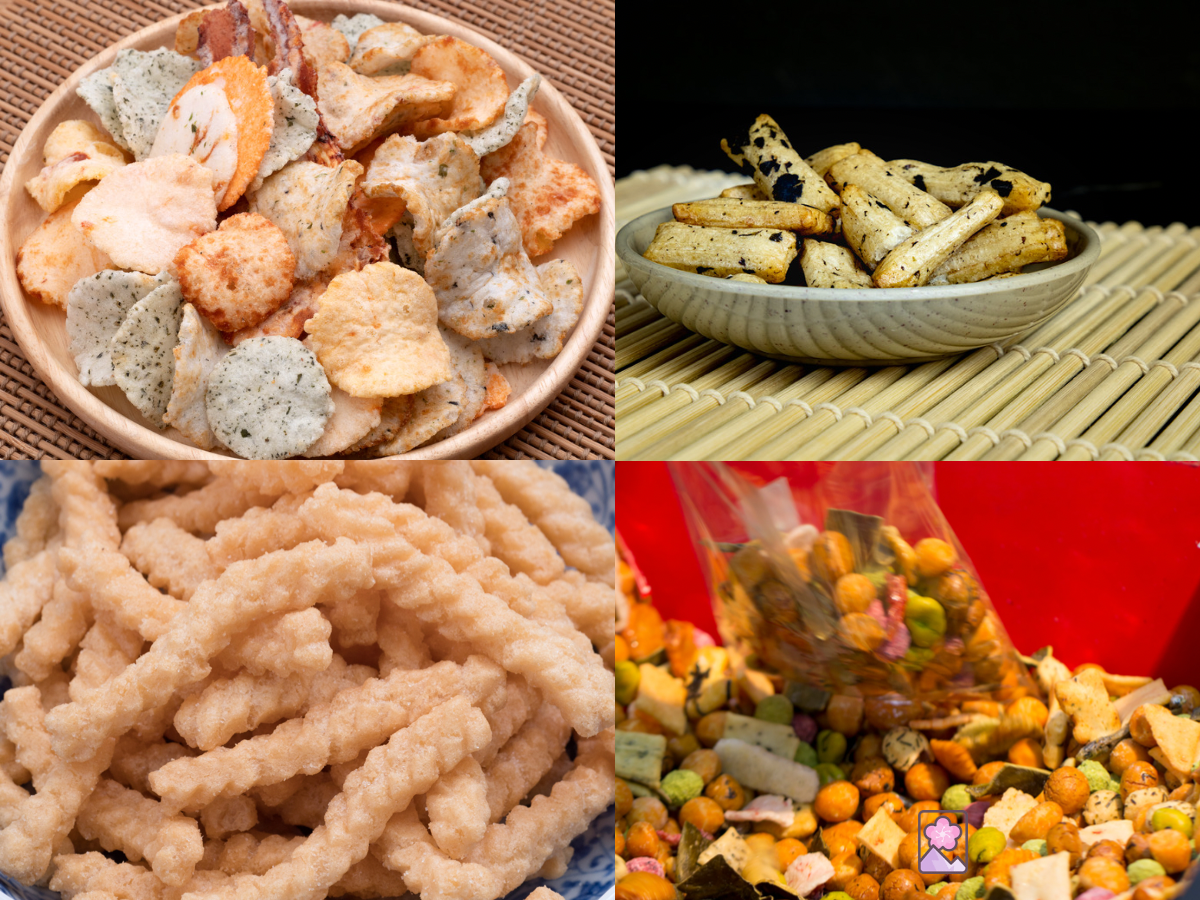 Japanese Snacks 101 — The Salty and Savory Snacks of Japan

Do you love the crispiness, the loud crunch, the sharp texture, or the savory aftertaste? Whatever it is that makes you reach for your daily dose of salty snacks, Japan has a lot to offer!

Do you love the crispiness, the loud crunch, the sharp texture, or the savory aftertaste? Whatever it is that makes you reach for your daily dose of salty snacks, Japan has a lot to offer!

Today I’ll tell you about the most popular chips, puffs, crackers, and bits that the Japanese love. They come in quite surprising flavors, so brace yourself and let’s get off on a journey through Japanese savory snacks!

At first glance, Japan may seem to have a similar selection of packaged chips and crisps to the US. At a second glance, you realize how diametrically different it is.

Sure, there’s always the basic, salted or pizza-flavored potato chips. But the most popular flavor combos in Japan are quite different than what’s offered on western supermarket shelves.

In addition, Japan went far beyond potatoes, corn, and wheat when it comes to crispy snacks. Rice is a well-used ingredient for savory delights, and so are shrimp, squids, and seaweeds.

These basic potato snacks probably exist everywhere in the world – and Japan’s no exception.

Some of the most popular potato chips and puffy potato stickflavors are:

It’s definitely not the caramel-topped popcorn that we adore in the west – Japanese caramel corn is something else.

First created by the snack manufacturer Tohato in the ‘70s, this puffed corn snack is similar to a Cheeto – but sweet. It’s combined with peanuts for a wonderful savory-sweet combo. It also comes in sweet potato, sakura milk, and pumpkin flavors!

You’re probably aware that a large portion of Japanese recipes include seafood. So, it might not come as a surprise that the island nation enjoys seafood snacks too!

Calbee, a brand name as legendary as Lay’s, launched the first shrimp snack back in 1964. It’s branded under the name Kappa Ebisen (かっぱえびせん). It has an airy texture with an incredible crunch.

The snack’s main ingredient is, of course, shrimp, minced and mixed into the dough and baked. Ingredients like wheat flour, starch, and vegetable oils are added to achieve the snack’s legendary texture.

The original shrimp chips are still the most popular option, but wasabi, yuzu (citrus), and garlic flavors are available too.

Calamari treats are a national favorite – and they’ve been around for a long time! Grilled and dried bits of squid are a traditional “finger food” and they go great with drinks.

There are many squid dishes out there, but there are basically three famous calamari snacks in Japan:

You might wonder how Tempura (天ぷら) ended up on a list of Japanese snacks. Normally, the deep-fried tempura battermakes any dish crispy and delicious. Tempura flakes, crispy little deep-fried pieces of wheat flour batter, are often used to bring crunch to meals. But why stop there?

Tempura is so widely loved in Japan that it’s eaten both fordinner and as a snack. In particular, tempura is mixed with squid or seaweed to make deliciously crunchy bite-sized pieces sold in a bag.

Ika ten, the squid tempura, is a uniquely textured snack that manages to be both chewy and crispy. Nori ten is a combination of seaweed and tempura. Sometimes, these come flavored with wasabi. Both kinds of tempura snacks go incredibly well with drinks!

Rice is a basic staple in any pantry in Japan. So, it may not come as a surprise that many types of savory and sweet rice snacks exist too, especially in the form of crackers. The dry rice cookies and crackers are collectively called beika (米菓).

Baked, fried, or grilled, there’s an incredible variety of rice crackers out there. Practically, each region in Japan has aspecialty rice snack with ingredients or recipes that can’t be found anywhere else. Two major categories of salty rice snacks are senbei and okaki.

Ask any senior in Japan what salty snack first comes to their mind, and the answer will likely be – senbei.

Senbei is a simple type of rice cracker with a long tradition behind it. You can buy a bag of senbei in any supermarket. But it’s also nice to find specialty stores that sell this type of snack in bulk – the traditional senbei stores have a lovely retro vibe to them. In many cases, the displayed price is per piece (or 2, 3, 5 pieces). That’s because senbei is usually a rather large disc shape, about the size of a palm of a hand.

This type of snack is usually made of non-glutinous rice (uruchimai) flour, but some regions of Japan use different types of flour. In particular, Kanto-region senbei is typically made of fine non-glutinous flour, which gives it a strong crunch. The senbei in Kansai uses glutinous rice flour, which gives it a softer texture. The dough is shaped and baked, fried, or grilled over charcoal.

Senbei traditionally accompanies green tea, so it’s no wonder that many types and grades exist. Most commonly, the crackers are seasoned with soy sauce, seaweeds, squid, black sesame, or chili pepper. From the deep-fried supermarket variety to artisan-grade senbei with unique flavors – everyone can find a version of this snack that they love.

With a similar recipe as senbei, kaki no tane is one of the most popular snacks to go with beer in Japan! This elongated, dark-orange piece of crisp looks very much like a persimmon seed – which is what the name of this snack literally translates to.

Yet – kaki no tane contains no persimmons nor their seeds – it’s a combination of slightly spicy rice crisps and peanuts.

But there are two key differences that set okaki apart from senbei:

Even though sweet rice is used, and the cracker is made out of a traditional Japanese sweet, okaki are savory snacks. Seasonings like soy sauce, salt, pepper, black sesame, nori seaweed, and other savory delights are added to enhance the salty flavors of okaki.

Savory snacks are, possibly, something people are universally drawn to. There are simply very few things in life that are as sweet as licking deliciously salty seasoning off your fingers after a bag of crisps.

If you’re satiated with Western snack flavors, Japan has a lot of fresh variety to offer. Many savory, salty, umami, and spicy snacks are available in unique flavors that you’ll find nowhere else in the world!